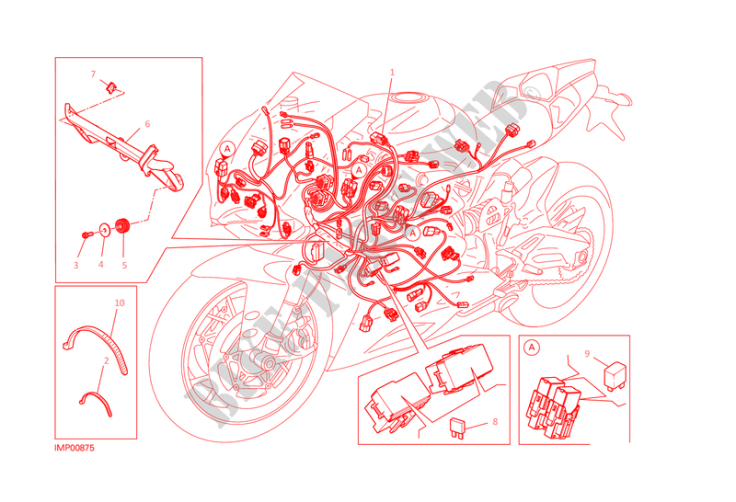 In 1980, the average motorcycle had a handful of sensors.  Today, it’s commonplace to find over 20 sensors on a bike. Since fuel injection, motorcycles have been adopting new technologies to increase safety, improve performance and offer new features.  The advantages and appeal of features like ABS, Lean-Angle Sensing Traction Control, Wheelie Control and even Tire Pressure Monitoring Systems are undeniable and have become a key selling point for today’s motorcycles.  There is however, another side to this story which is rarely talked about by the media: what happens to these complex digital systems over time and what happens when they fail?  Let’s discuss.

It all started around 1990, when innovator BMW brought ABS to their K100 motorcycles.  An option at the time, the system added 11kg (24 lbs) of weight to the bike but promissed improved braking safety.  Fast forward to 2019 and the prevalence of sensors on modern motorycles has grown exponentially.  Take a look at a manufactuer’s sell sheet and the amount of sensor-powered tech crammed into today’s bikes should amaze, but also concern you.

For the sake of this discussion, a sensor is an electronically controlled physical device which takes a reading (wheel rotation speed, for example) and feeds the information back to a computer to 1) either display the information (eg. your current speed) or 2) make decisions based on information gathered from one or multiple sensors (eg. traction control).

How the System Works: Although there are variations of how this is acheived, the general idea is to monitor the rotation speed of both wheels and to prevent them from locking (and thereby creating a skid).  Sensors are placed in close proximity to the wheel’s hub and connected to a processor which interprets the data. Many systems have a “defeat” feature whereby ABS can be disabled on one or both wheels for scenarios where wheel lock may be desirable (eg. off road, supermoto…)

Failure modes: If any part of the system fails (a wheel speed sensor for example), the entire ABS system is typically disabled and the rider is notified via a fault code on the display.  Because ABS is a safety system first and foremost, a trip to your dealer will probably be required to diagnose the issue, perform the repair and then reset the fault code.

How the System Works: Of all the recent innovations in motorcycles, the suite of features that are enabled through ride-by-wire are perhaps the most meaningful.  From model year 2010 (approximately), many manufacturers began moving from a conventional throttle cable (where twisting the right grip literally increased fuel delivery to the motor) to a digitally proportional throttle mechanism (where twisting the throttle would instead send a signal to a processor which would interpret the “request” and make decisions based on set parameters, thereby allowing for intervention which you know as “Traction Control”).  Ride-by-wire brought with it a slew of new desirable features (variable throttle maps for example) that have become standard at the time of writing this. The other major component of these systems is an Inertial Measurement Unit (IMU): a sophisticated combination of accelerometers and gyroscopes which measures lean angle, acceleration and deceleration.  This data is then run through predictive algorithms to prevent wheel spin or loss of traction (cornering ABS or slide control) or to keep both wheels on the ground (wheelie control or rear wheel lift mitigation).

Failure Modes: Because these systems involve several sensors as well as a computer, there’s a lot that can go wrong.  Often times, if any portion of the system fails or is out-of-synch, the system will force the bike into “limp mode” -a failsafe designed to get you and your bike to safety (read: to a dealer) so that you don’t get into an accident as a result of the disabled or faulty system.  Another failure mode may disable certain features (eg. wheelie control) or revert to a default throttle map, allowing the bike to be ridden “normally” until the fault is diagnosed.  In any case, an electronic diagnostic tool is usually required to assess the fault code so that the appropriate part of the system can be repaired.  Diagnostic tools are usually brand-specific (eg. you can’t use a Ducati diagnostic tool on a Yamaha and vice-versa) and most are not available to consumers which means you’ll have to see a dealer for the repair.

How The System Works: There are a few variations of how electronic suspension works but at their core, most systems do away with manual (analog) adjustments for parameters like preload, rebound and compression damping, thereby making these adjustments digitally.  This allows a computer to control the parameters dynamically (eg. if the system senses braking, it can stiffen up the fork) or at the very least, allows the user to select a ride mode (eg. sport”) or stiffness setting (“soft”, “medium”, “hard”) and have the system decide on the appropriate behaviour of suspension components.

Failure Modes:  The majority of systems will keep the last known suspension settings in the event of a failure and display a fault code.  Bikes are usually rideable but require model-specific diagnostic tools (that again, only a dealeer would have).

How The System Works: What used to be reserved for track use and sport bikes has now found its way on to just about every type of bike, from touring/ADV bikes to roadsters. The main benefit of a quick shifter is that it allows for clutchless upshifts (and often clutchless downshifts), thereby simplifying (and quickening) the process of changing gears.  In order to achieve this, a sensor (often of the “strain gauge” type) is placed somewhere along the shift linkage to sense when a shift is about to happen and interrupt the fueling of the bike long enough for the new gear to engage.  Quick shifters that support downshifts will also work with the fuel management system (or ECU) to “auto-blip” the throttle and rev match.

Failure Modes: Because quickshifters are more of a convenience system than a safety system, failures can result in improper operation and may not necessarily trigger a fault code.  Dropping the bike on the shifter (left) side or wear over time may result in quick shifts becoming less smooth or ceasing to function altogether.

How The System Works: This often overlooked feature is one of the oldest safety systems to grace motrcycles.  Its purpose is to avoid the potentially fatal consequences of a bike being ridden with the kickstand down by disabling ignition when it senses that the kickstand is down.

Failure Modes: If you search the web for “kickstand kill switch”, you’ll be greeted with pages and pages of results from users who are attempting to disable this system.  The reason is that the sensor in question often fails, resulting in a bike that won’t start.  The fault is tricky to diagnose which is why many new bike owners immediately disable the system (through aftermarket kits of re-wiring of the relay).

How The System Works: Most systems use pressure sensors that replace traditional valve stems and are mounted on the rim (inside the tire).  The sensors detect changes in pressure and relay either warnings (“low pressure”) or data (“32 PSI”) to the bike’s display.

Failure Modes: Out of necessity, the sensors inside the tires are wireless and battery powered.  Over time, batteries need to be replaced.  If a sensor fails or the battery is drained completely, a fault code will typically be displayed and the bike will operate normally.

How The System Works: As emission standards become more stringent, so too have manufacturers’ technologies around fueling.  The role of an Oxygen sensor is to analyze the composition of exhaust gases exiting the motor and feed information back to the ECU in order to dynamically optimize the air/fuel mixture. Multiple sensors may be used at various points on the exhaust system to collect and relay data. At least in theory, this results in more complete combustion of fuel which has environmental and performance benefits.

Failure Modes: Oxygen sensors can fail in two ways: catastrophically or gradually. A catastrophic failure occurs suddenly if a sensor has been over-heated, submerged or otherwise damaged and will usually result in a fault code.  The bike should still be rideable but may display signs of sub-optimal fueling such as rough idle, bucking or surging under throttle.  Gradual failures are more difficult to diagnose as they may not throw a fault code and may cause fueling to degrade over time or only in certain conditions (eg. at wide-open-throttle, at idle, when it’s damp outside, etc).  Oxygen sensors are generally considered to be a wear part and can be replaced without dealer support.

The array of sensors built into modern motorcycle (and the sophisticated systems they power) should be an imporant consideration for any modern motorcyclist.  While technology enables new features, it also creates new challenges around long-term reliability and one’s ability to service their own motorcycle.

Disclaimer: The above article and the opinions stated within do not constitute or imply the endorsement or recommendation of modifications or alterations to any OEM equipment, settings or hardware.