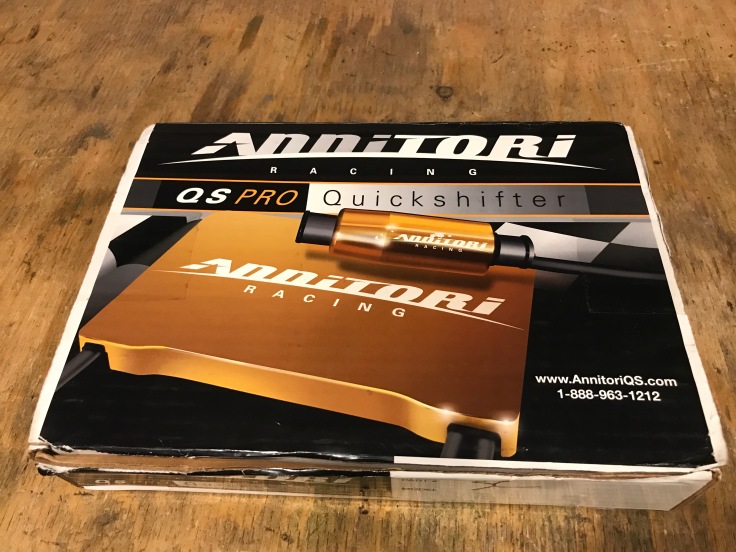 More and more bikes come equipped from the factory with quickshifters today, so it’s only natural that aftermarket solutions have matured to cater to the remaining market.  This is the case for Annitori’s QS Pro Quickshifter which is the topic of this review.

Like most aftermarket quickshifters, the QS Pro is a strain-gauge-based system (more on that later) that can be fitted to a broad range of bikes and enables clutchless up and down shifting under open-throttle conditions.

Although the primary benefit is that shift times are reduced (thereby increasing acceleration), what most riders will care about most is that it allows for more concentration on the other aspects of riding (line selection, body positioning and overall smoothness).  It’s also a lot of fun and anyone who has experience with quickshifters tends to want one on every bike they own.  The street price for the QS pro is around $300 CDN and can be purchased from a variety of online stores as well as on eBay.

The system is made up of two parts: 1) A strain gauge that mounts in-line with the shift rod and 2) a processing unit that connects to the ignition system and determines the logic for interrupting the spark from the bike’s ECU.  The strain gauge (as the name suggests) can detect pressure from the rider’s boot pushing on the lever in either direction and sends a signal to the processing unit which interrupts ignition for a fraction of a second, allowing for the new gear to be selected on-the-fly, without using the clutch to disengage the gearbox.  For reference, this is the same mechanism that most OEM quickshifters use so the tech is not something new but rather a standard.

Installation of the system on our subject bike (2010 Ducati Streetfighter 1098) was fairly straightforward and took a little over an hour.  Being a naked bike, there were no body panels to remove and there are a total of 5 connections to be made (including power), none of which require cutting or splicing.  Installation can be divided into 4 parts:

1. Connect the wiring harness by locating the ignition lead for each cylinder.  In our case, since the bike is a twin, there are two and they are located on the left side of the frame, in plain view.  The harness mounts with piggyback connections which is both simple but also reassuring, as it avoids the possibility of creating an incorrect connection and possibly damaging the bike.

2. Install the processing unit in a concealed location.  Connect it 1) to the battery, 2) to the wiring harness and 3) to the strain gauge.  To save yourself trouble, it’s easiest to think through how you are running the wires at this step so you don’t have to disconnect anything and re-route wires later.

3. Remove the stock shift rod (one bolt on each end) and replace it with the shorter rod (that can be purchased with the QS Pro at an additional cost) and strain gauge.  The two parts are attached with stainless hardware which Annitori provides in the kit.  At this point, with all the connections made, you can start the bike to make sure everything is working and if there are no CEL’s, move to the next step.

4. Tidy up all wires with zip ties (not included) to complete installation then take the bike for a ride to test out the new setup!

Not that it’s required as part of setup, but the QS Pro also offers both iOS and Android apps which connect to the processing unit via Bluetooth and allows the user to configure a few parameters, such as sensitivity of the strain gauge and kill time, both up and down. Connecting to the QS Pro is simply a question of downloading the app from the App Store, opening your device’s Bluetooth settings and selecting “QS Pro” from the list of nearby devices.

Simply put, the Annitori QS Pro works as advertised: upshifts can be done smoothly while at WOT and without using the clutch.  At the track or at brisk street pace, the unit worked flawlessly and required no additional configuration on our test bike. From second gear upward on upshifts, it could be mistaken for an good OEM system.

On the downside, there are limits to what this type of system can achieve.  1st to 2nd gear upshifts were jarring and since kill time cannot be set for a specific ratio. In fairness however, the 1st to 2nd gear shift is a challenging one even for some OEM systems so the QS Pro is not alone with this limitation. Furthermore, although clutchless downshifts are possible, their real-world utility is questionable without rev matching which the QS Pro doesn’t offer. Moving up to a more sophisticated (but also more expensive and complex) solution such as Tune Boy may also be a consideration, depending on the application and desired end-result. Also of note: the QS Pro can be used in conjunction with fuel management systems like Rapid Bike’s Evo system as they do not use any of the same connections.

All in all, we feel that Annitori has delivered great value in the QS Pro system and that it’s a great addition to the potent Streetfighter 1098.