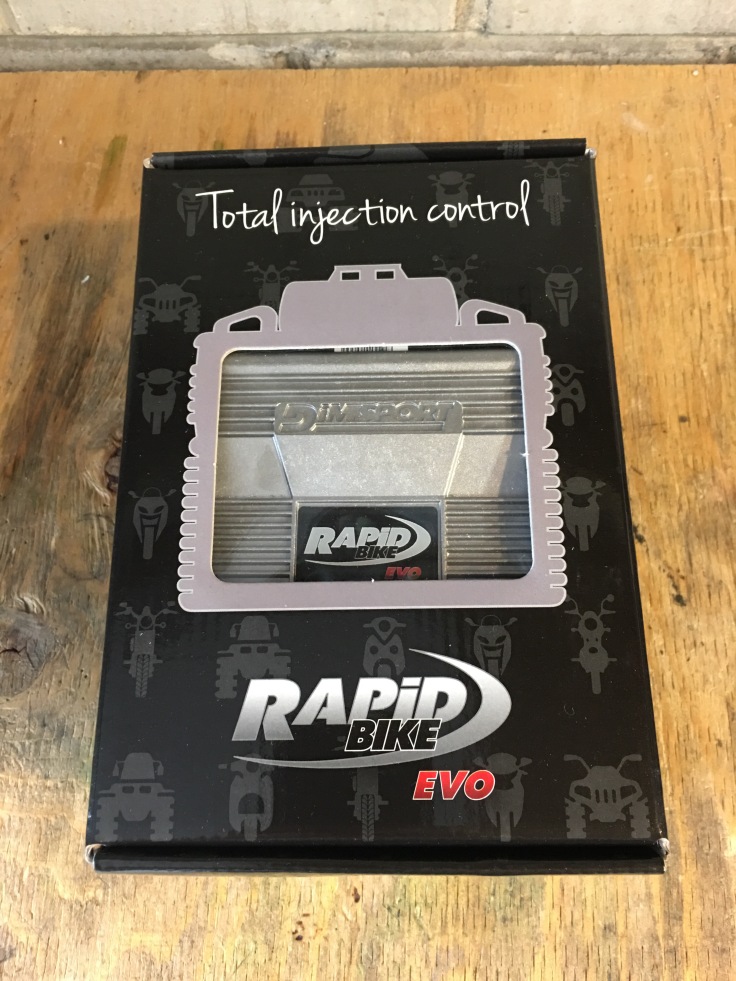 Why is fueling in modern motorcycles such a prevalent issue?  One would think that manufacturers such as Ducati, Honda, Yamaha, Aprilia (…), with their deep technical knowledge, should be able to build a bike that has spot-on fueling from the factory.  Alas, this is not the case and there a many reasons for it, few of which are the manufacturer’s fault.  Fortunately, technology has come a long way since the introduction of fuel injection and Rapid Bike claims to have a “magic box” that can cure literally any modern bike’s fueling woes.

In this in-depth review, we dig into 1) why fueling is a problem in modern day motorcycles, 2) What the Rapid Bike Evo solution consists of and how it works, 3) how to install it and most importantly, 4) how it affects the bike’s performance.

1) Why Fueling is a Problem in Modern Day Motorcycles

If you’re a motorcycle manufacturer today, you are constantly faced with a tough challenge: how to keep your motorcycles compliant with emissions regulations (EPA, Euro4, etc) while providing the performance that today’s competitive market demands. As such, a manufacturer may start with a motor capable of 200HP but must then ensure that same motor is compliant with regulations the world over.  The result is closed/locked Electronics Control Units (ECU’s), heavier/more restrictive exhaust systems, bypass valves, secondary evap systems…the list goes on.  It’s no surprise then that the first thing the average motorcyclist does is to remove all these “un-necessary” restrictions in an effort to free up power.

The resulting stripped-down machine has the potential to be more efficient, but often falls short due to the fact that the ECU isn’t able to adapt to the new, unrestricted system.  There’s also an important disclaimer that aftermarket part manufacturers must remind the public about: tampering with a bike’s emissions system may render it illegal for road use (again, in certain countries).  It’s also worth mentioning that if one were to tamper with a motorcycle that is under warranty in this manner, that the manufacturer may well claim that the warranty is now void. As with all modifications, proceed at your own risk and seek the advice of reputable experts when in doubt.

Furthermore, tuning of the ECU has historically been a challenge -particularly on Ducati motorcycles. Ducati ECUs typically feature a “closed loop” system whereby conventional tuning cannot modify the low RPM range, often requiring custom programming (“re-mapping” of the ECU) and time on a dynamometer (or “dyno”) to tune across the full range.  Although these solutions can be effective, they are often costly or out of reach for some, but more importantly, use fixed parameters based on the state of the bike at the time it was programmed.  If one were to get a custom “tune” done for their bike, then change their exhaust system, air filter or even ride at a different altitude, the static custom tune may not be able to adapt, thereby requiring the process to be repeated.  This is one of the key selling points of Rapid Bike’s “Evo” module: a system that adjusts and optimizes parameters in real time, as you ride.

Rapid Bike Evo: What’s In The Box and How It Works

Rapid Bike is a family of products from Italian engine calibration company Dimsport (which has subsidiaries in countries such as the North America, South America and Spain). The Rapid Bike range has 3 different products (at the time of writing this):  Rapid Bike Easy, Evo and Racing. As the names suggest, the level of sophistication and the number of tuning parameters increase as you go up the range. At the most basic end, manual tweaking is possible via a limited number of sensors. Auto-tuning is then added with the Evo model, as is an optional quick shifter interface (for Rapid Bike’s proprietary quick shifter, sold separately). At the highest end (and for certain bikes only) one can do things like increase the RPM limit, customize engine braking performance and even add a pit limiter.  For the purpose of this review, we used the mid-level product, Rapid Bike Evo.

On most bikes, installation of the Rapid Bike Evo module requires the removal of body panels, seat and fuel cell.  The rest of the installation is a question of locating the 6-8 connectors where the harness’ interconnects will bridge into the system.  On the Streetfighter 1098, the only exception to this was the throttle position sensor where a quick-connect was provided to splice into an OEM connector without disconnecting it. A ground wire is also connected to the battery and the remainder of the installation is more about tidying up the wires and finding a suitable location for the Rapid Bike Evo module itself.  Simple in theory, not necessarily in practice.

Overall, the Streetfighter installation took roughly 6 hours and having now done it twice (the other was on a customer’s Monster 1200S), we do not recommend this procedure for anyone who is not an intermediate to advanced mechanic, primarily due to the number of things that can go wrong if an improper connection is made (read horror stories here). Many of the connections look similar and have the same connectors, so locating a sensor and following the lead through the bowels of the bike is the only way to avoid what could be a costly mistake.  What’s more: some of the connectors on the Streetfighter were hidden so deep that we had to find a very specific sized screwdriver and (gently) pry at the connector for over half an hour as the alternative was taking the radiators off.  Again, not impossible but not for the faint of heart.

Once the wiring harness connections are made, the Rapid Bike unit can be connected and the fuel cell can be replaced.  Then comes the moment of truth: turning on the key and making sure no faults are generated on the bike’s dash (also known as “Check Engine Lights” or “CEL’s”). If successful, you can then connect your PC to the Rapid Bike module via supplied USB cable to ensure the unit is powered up and has a base map loaded. Note that you will have to register your Rapid Bike module on the Dimsport website (using your serial #) and download/install the Rapid Bike tuning application called “Rapid Bike Master Free” on a Windows PC.  At the time of writing this, Mac/OSX is not supported and there are no mobile (iOS/Andoid) versions so a Windows PC is mandatory.

With  the PC connected, you will be able to view the baseline parameters that were loaded on the Rapid Bike module. Having spoken extensively with the team at Rapid Bike, it is not recommended to make any changes upon initial setup so at this point, all we are looking to do is ensure the unit is connected properly.

If the bike did not generate any CEL’s and the Rapid Bike unit is displaying correctly on your PC, the very last step of the installation is to fire up the bike and go for a ride.

The first few minutes of the 200km, 1/2 day test ride were uneventful. The Streetfighter bucked and protested wickedly from 1,500 RPM to about 5,000 RPM, then gradually smoothed out until 6,500 RPM where the motor comes on at full song (see dyno graph above). After about 50km of riding however, pulling away from a stoplight started to smooth out and midrange throttle response also seemed to improve. By the end of the ride, the bike was showing some notable improvement in the sub-6,000 RPM range, although still not perfect.

Back at the shop, we connected the Rapid Bike Evo back to the PC and had a look at the Auto Adaptivity parameters.  The module appeared to be doing what we expected: adding fuel in the lean, low RPM areas which had begun to smooth out low RPM fueling.

After a few exchanges with the Rapid Bike team (who it’s worth mentioning, were very responsive), we adjusted some of the parameters (such as the “Start Correction” slider) to address the lean areas at even lower RPM than the default parameters and took the bike for another 200km ride. By the end of the 2nd ride, fueling improved significantly. Although we won’t know the numbers until the Streetfighter’s next dyno run, fueling from 2,000-5,000 RPM was greatly improved and midrange power delivery made the bike much easier to ride. If we were to rate low RPM fueling with “ideal” being 100%, the pre-Rapid Bike Evo Streetfigter was in the 50%-60% range and has now improved to the 80%-85% range. Although not perfect, the results are quite impressive and made a significant difference is the overall rideability of the bike.

After 10 hours of shop time and 500km of riding, the Streetfighter 1098 is much closer to being the bike we had always hoped it could be. The Rapid Bike solution worked as advertised, enriching the fuel mixture where the bike needed it and it will continue to do so as we ride. Should the Streetfighter ever leave our stable, the Rapid Bike Evo module can be removed, a new map loaded, a new wiring loom purchased and the unit can be installed on a new bike. So is the solution a silver bullet for motorcycle fueling?  For some, yes, but the answer ultimately depends on your level of mechanical aptitude as well the other tuning options that may be available to you. One thing is for certain: the device works as advertised and should provide many miles of smooth fueling enjoyment for anyone who goes through the trouble of setting it up.