Part Panigale, part Monster, Ducati’s Supersport seeks to split the difference between the modern naked and sport bike by combining the best of both worlds. Does Ducati’s latest revival manage to achieve that fine balance? 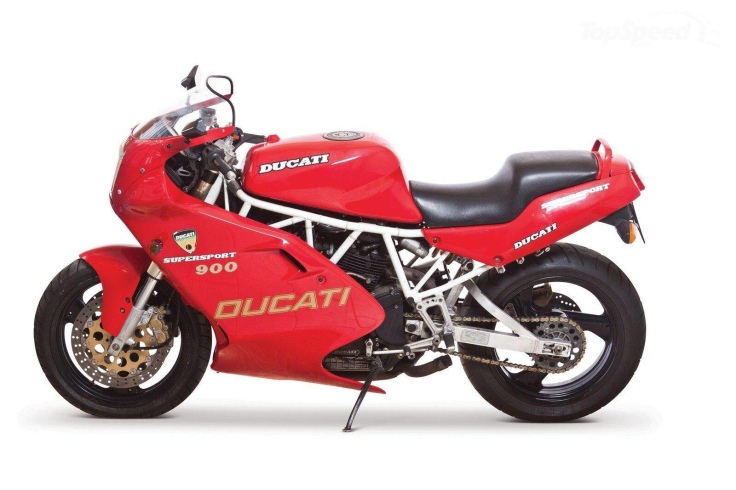 For the longest time, Ducati has been exploring ways to blend the soul of a superbike into a more well-rounded, everyday useable package. To deliver the visual and visceral appeal of a fully-faired sport bike, without sacrificing comfort and real-world rideability. It should come as no surprise then that Ducati has recently resurrected the “Supersport”, a marque which previously spawned some of the brand’s most beloved sport touring machines.

The deliver a comprehensive review and explore the true potential of this bike, we rode it for over a thousand kilometers in its home land: on Italy’s mountain passes, in its busy cities, on its freeways and finally, through the scenic countryside.

Throwing a leg over the Supersport for the first time, what becomes immediately obvious is that it’s more “Panigale” than it is “Monster”, albeit with a few caveats.

First, the seat height of 31.9″ (810mm) makes the bike easy to maneuver at low speeds and should allow shorter riders to feel comfortable when coming to a full stop. The compromise (which we’ve noted in many of our other Ducati bike reviews) is that to achieve the low seat height, the seat padding is scalloped in such a way that it cradles the rider against the tank with no room for fore/aft movement. One definitely sits “in the bike” more so than “on the bike” in this configuration, which is very un-sportbike-like. Although this may be fine for some, taller riders (myself at 6′ included) may appreciate a little room to move around.

Footpegs are high enough to prevent scraping at high lean angles but never caused any discomfort on long rides. We even rode with a passenger for a while and although this is no Multistrada or Goldwing, it’s certainly as 2-up friendly as any naked bike out there. The scalloped seat we are so hot and cold about puts the rider lower and the pillion higher, providing a better line of sight for the passenger.

Next, the raised clip-on bars feature a position that will feel familiar to any sport bike rider, yet does not not tax the wrists or lower back any more than your average naked bike. The rider’s triangle has a definite bias towards “sport” but should not offend any would/be tourer from doing miles. Speaking of which, the 2-position adjustable windshield is a nice feature and provides a decent air pocket to ride in at freeway speeds when set to the higher position.

The mirrors unfortunately skew to the Panigale side, vibrating at speed, looking like bug antennae and providing a great view only of your shoulders. They do fold away for tight parking or storage but prospective owners will likely shed them in exchange for a set of bar ends and block off plates which should be both aesthetically and functionally superior.

Overall (and somewhat surprisingly), the stock ergos of the Supersport were all-day-long comfortable, functional and strike a good balance between sport and touring.

At the heart of the Supersport lineup is Ducati’s 937cc Testastretta motor. An evolution of the 1098 Superbike power plant (2010), this now tried-and-true platform sports 30,000 km / 18,000 mile valve service intervals (up from the dismal 12,000 km / 7,500 mile intervals of the original). This motor is also found in Ducati’s latest Hypermotard platform as well as in the Multistrada 950. The “middleweight” V twin is rated at 110HP and 69 lb-ft of torque (80% of which is available from 3,000 RPM). What this translates to in real-world performance is just enough power to make things exciting, but never enough to scare you. Gearing splits the difference between sportbike tall and touring short with a first gear that’s actually good for over 80 km/h / 50 mph and a sixth gear that happily cruises at low RPM on freeways.

The exhaust note from the shotgun style cans features the famous “Ducati over-run burble and pop” and gets high marks for sound (as far as Euro 4 compliant stock exhaust systems go). Clearly, a $3K Moto GP-inspired Akrapovic titanium exhaust system would liven things up both aurally and viscerally, but that’s a tax few owners will pay on top of the bike’s $14K (CDN) base asking price.

If we have one gripe with the motor on this bike, it’s not so much with the motor itself but with the heat it generates when packaged behind fairings (not so with the Multistrada 950 or Hypermotard 939). At slow speeds or in stop-and-go traffic, heat can be felt at the knees, particularly on the right (exhaust) side as it vents from behind the fairing. Let’s be clear that this is no 1199/1299 Panigale, I-have-to-get-off-this-bike-ASAP heat, but rather a slight annoyance that’s worth calling out. At constant 1st gear pace (or better), it was never an issue, even on a 30 degree (Celsius) day.

The Supersport benefits from Ducati’s well thought-out ride modes (Sport, Touring and Urban) which are completely configurable for power delivery, traction control and ABS in addition to being on-the-fly switchable. To the Bologna factory’s credit, the electronics on the Supersport (and most other modern Ducati’s) are class-leading and forgoe some of the ideosynchracies that plague other brands (eg. electronics that reset themselves if the key is turned off, TC or ABS settings that can’t be disabled or ride modes that can’t be configured or changed while moving). The praise extends to the simple monochrome LCD display that, although lacking sophistication compared to the latest middleweight class rivals, displays information well and even includes a fuel gauge.

The ride-by-wire throttle is Ducati’s latest generation and usually feels direct and responsive. There is a slight amount of on/off throttle abruptness in the most aggressive power delivery mode but something we easily got used to. Fueling is quite good, even at low RPM and shows that Ducati has been addressing this legacy problem area (Ducatis of old were often plagued by terrible low RPM fueling). The 16 litre / 4.2 gallon (US) fuel tank gave us an average range of 250 kms / 155 miles during mixed riding conditions. Respectable for a weekend tourer.

Coming in just over 460 lbs (wet), the Supersport is a tad heavier than a Monster 821 or Hypermotard 939 (450 lbs respectively). Whatever the difference on paper however, we were hard-pressed to ever wish the bike was any lighter, even when carrying 30+ lbs of side-luggage (courtesy of a set of Hepco & Becker soft panniers).

The base Supersport features a fully adjustable Marzocchi fork and preload-adjustable Sachs shock. We found this combination to work extremely well for commuting, 2-up touring and even spirited twisty road riding. When pushed to the limit, the shock shows itself to be the weak link, squatting helplessly mid-corner. Those with sportier or track riding ambitions could look to the “S” model which offers fully adjustable front and rear Ohlins components, an up/down quickshifter and a frost white with red wheels livery. It’s worth saying however that the stock setup should please even advanced riders and stands out as being a very good “base” model setup.

All Supersport variants come with Pirelli Diablo Rosso III, bi-compound tires (120/70/17 front, 180/55/17 rear) which prove up to the task of everything from touring through to very aggressive street riding. The tires warm up quickly and provided decent wet weather traction on the few occasions when we got caught in the rain. What the Rosso III’s give up in life expectancy to the older Rosso II’s, they certainly make up for in edge grip and should keep most riders happy for several thousand kilometers.

In the end, the Supersport is hard to fault. It’s as much a sport bike as it pretends to be, while managing to be versatile enough to handle what most people need out of an everyday motorcycle. Even the base model requires very little modification out of the box to be a solid performer and we imagine that the upgraded “Supersport S” would be even better still. As with all multitools, it does compromise in certain respects, but more than makes up for it as an all-around package.

-Heat from motor can get painful in stop-and-go traffic