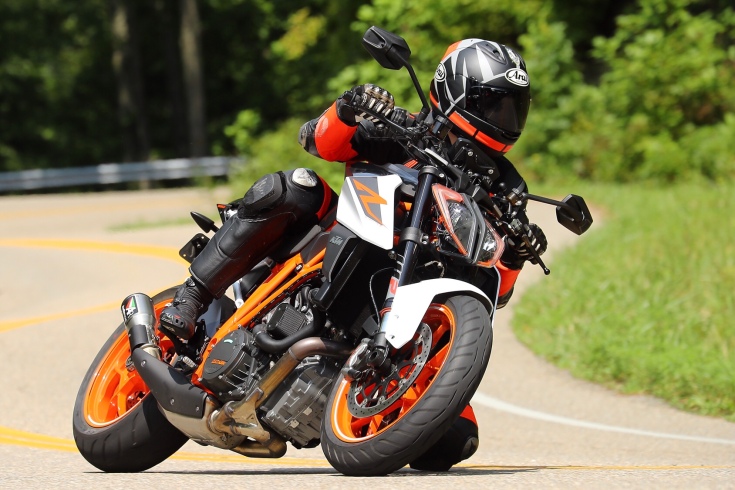 Since its introduction in 2014, much has been written about KTM’s 1290 Super Duke R (dubbed “The Beast”).  And for good reason; the bike has been a top contender in every “Super Naked” bike test since its entry into the category and KTM has revised the model twice: once in 2016 with updated electronics (read our review here), then with a more significant overhaul in 2017  (“The Beast 2.0”) to keep the bike competitive in what is perhaps the most contested segment in sport motorcycling.  But what’s the latest bike really like to live with and is it worth the premium asking price, compared to its many rivals?

The first thing one needs to understand about the 1290 Super Duke R (herein referred to as “1290 SDR”) is that it’s perhaps the only bike in the category that isn’t derived for a superbike.  As a matter of fact, KTM doesn’t even have a superbike model for sale at the time of writing this (RIP KTM 1190 RC8). Case and point: Aprilia’s Tuono is derived from their RSV4, BMW’s S1000R (read our review here) is a decendant of the S1000RR and the Yamaha MT-10 shares a platform with the YZF-R1.

It’s this lineage (or lack thereof), that makes the 1290 SDR stand out in its class as we shall explore below.

Throwing a leg over the Super Duke, the first thing you’ll notice is that you sit “in” this bike, not “on” it.  This is partly due to the tank, which rises unusually high in relation to the seat, as well as KTM’s (as every other manufacurer’s) attempt at keeping the stock seat height as low as possible for vertically challenged riders (in this case, 835 mm or 32.9 in).  For 2017, KTM has moved the handlebars forward and down, in an attempt to push the riding position ever so slightly towards “sporty”, while still remaining comfortable.  Where the previous model was more “sport touring” upright, the new model puts more of the rider’s weight over the front end for better feel while still remaining all-day comfortable.  On the ergos side, our only real gripe is with the stock seat; an obvious compromise which many an owner will toss, in exchange for a taller and more well-padded unit (we can handily recommend the KTM Powerparts Ergo Seat).

Foot pegs offer very good grip in all riding scenarios and we never found a way to drag them on the street.

KTM also deserves credit for making several components adjustable such as the handlebar mount position (fore or aft), TFT display (angle),  shifter and brake pedal.  Someone at KTM realized that riders don’t all have the same sized boots or the same length arms and did something about it.  Rest of the industry, please take note.

Wind protection is average for the class, although we believe the “praying mantis” headlight does its part to deflect wind somewhat at higher speeds.  The mirrors are about as good as stock units get and provide a largely vibration-free view of what’s behind, while still looking good and suiting the bike’s overall aesthetics.

The star of the show is KTM’s latest LC8 motor: At 1301cc’s, it now produces 177 HP and 104 lb-ft of torque with a 10,500 RPM redline.  The most recent update to the 1290 SDR (2017) endowed it with titanium intake valves, new velocity stacks and a higher compression ratio, all of which contribute to the bike’s increased rev limit, peak power figures and suprisingly, its 10% better fuel economy.

The motor is somewhat of a chameleon, able to adapt itself to a wide variety of riding situations that range from commuting, all the way through to track days.  Fueling is about as close to perfect as can be expected for a 1301cc twin, with progressive maps (street, sport and track + a rain mode) which offer a range of power delivery options.  The more subdued mode (street) brings the power on gradually and makes the 1290 SDR as easy to ride as any middleweight naked bike out there.  The Sport mapping starts to show more of the motor’s potential but maintains a smooth delivery that’s well suited for spirited street riding.  Finally, the Track map delivers a sense or urgency and immediacy that requires mental recalibration, even if you are used to riding other big twins or big displacement nakeds.  Although not abrupt, the early availability of torque makes for a thrilling ride and you’ll be hard-pressed to complain about available power on corner exits at your local circuit. The LC8 pulls hard all the way to its 10,500 RPM redline and the revised motor feels more rev-happy on the top end than the outgoing model. Indeed, there is a “Beast” mode within the 1290 SDR but what makes this motor such a gem is its versatility (when combined with ride-by-wire).  It can be lugged at low RPM, ridden happily in the midrange or shifted hard at redline. We can’t think of another motor that’s as capable and flexible.

KTM has historically made some interesting (read: poor) decisions when it comes to electronics on the 1290 SDR and the 2017 model continues this trend.  2014-2016 models wouldn’t retain rider settings without an optional “dongle” and didn’t allow for disabling wheelie control without disabling traction control entirely.  The 2017 overhaul takes a new direction, breaking a host of electronics out into optional packages that one must purchase in addition to the already eye-watering sticker price of $20,599 CDN ($17,999 US).

How anyone could see KTM charging extra to “unlock” these features on a $20K bike as anything as a gouge is beyond our comprehension, especially considering that every competitor in the class includes these features as standard, for a lower MSRP.  Alas, motorcycles are passion purchases and we suspect that nearly every 1290 SDR owner will pay this “tax” to unlock the bike’s potential.

On the subject of the packs theselves: the quickshifter works well for the mostpart but lacks the smoothness found in Aprilia or BMW’s systems. KTM My Ride is a work-in-progress software project that provides little benefit at the time of writing this, save the ability to see who is calling from the bike’s display, or control the music on your phone via the bike’s switchgear.  It’s worth noting that KTM is promissing to eventually release turn-by-turn navigation on the bike’s TFT display but based on their track record with software development timelines, we’re not holding our breath.

As previously mentioned 3 of the ride modes (Rain, Street and Sport) have preset throttle maps and traction control settings and all have AWM (Anti Wheelie Mode) which brings the front end down (albeit gently) once things start to get fun. That leaves the “Track” mode as the only mode with user-configurable TC (Traction Control), throttle maps and AWM parameters.  As such, most advanced riders will end up leaving the bike in Track mode and toggling parameters on the fly, based on their preferences.  The only issue with this is that Track mode has its own contextual display which means that if you want to see the ambient air temp or even the time of day, you’ll need to exit track mode to do so.  A minor annoyance but one worth noting.

Whatever riding mode you choose, it’s fair to say that you’re going to be doing wheelies, whether intentional or not, in any of the first 4 gears.  Between not sharing its chassis with a superbike and having a lot of torque available at all times, the 1290 SDR is quite happy to throw its front end in the air pretty much anytime, once AWM is disabled.  The good news is that Track mode remembers/stores the user settings.  With the Track Pack, gone are the days of needing to toggle each parameter every time you turn the bike on.

Other noteworthy electronic features of the Super Duke are the keyless ignition and fuel cap.  Ignition is a simple button press that checks for proximity of the key fob, whereas the fuel cap has a release that also requires the fob to be in proximity.  In our experience, both systems work well and are welcome additions.  Cruise control is also standard and the switchgear is backlit, a nice touch when riding at night.  Heated grips are supported by the software and can be toggled from the controls but are an add on that must be purchased separetely ($179.99 CDN).

Handling is perhaps the 1290 SDR’s most polarizing characteristic.  Those hoping for that “sport bike with handlebars” feel will be sorely disappointed.  That’s not to say that the Super Duke doesn’t stop, corner or hold a line well -because it absolutely does.

Stopping in particular is one of the SDR’s strengths, aided by Brembo M50 calipers pinching 320mm discs. Think more “giant supermoto on rails” and you’ll be in the right frame of mind.  Ridden at a civilized or even spirited pace, you’d be hard-pressed to fault the chassis, suspension components or tires.  You may not even realize that the front end is only 2-way adjustable (compression and rebound damping, no preload) or that the rubber is Metzler’s M7RR, rather than a stickier Dunlop or Pirelli tire.  It’s worth noting that KTM did stiffen up the front and rear suspension (about 10%) over the 2014-2016 model.

Combined with the revised ergos, it all works incredibly well until you approach race pace, at which point the non-superbike begins to waggle its head and the (non-adjustable, analog) steering damper steps in to calm things down.  Those with a supermoto background will feel right at home, driving their weight forward to maintain front end feel whereas anyone hoping to just lean off and drag a knee will find some unexpected drama, the front end feeling vague without the appropriate technique.  Likewise, when the 100+ lb-ft of torque are called upon at wide open throttle in a straight line, the 1290 SDR likes to shake its head as the front end skims the ground.

Whether these charater traits are exciting, terrifying or even relevant to a prospective buyer will require careful conideration.

The 1290 SDR is perhaps the best “do-it-all” package for anyone who rides mostly on the street and enjoys the occasional track outing.  Case and point:  If you’re looking for a sport bike with handlebars, you should consider BMW and Aprilia’s offerings.  If you have ridden and love upright middleweights like Yahama’s FZ-09/MT-09 or Ducati’s Hypermotard or even Monster series, then you can imagine the 1290 SDR as being a more modern, refined, hopped up version of those machines…on steroids, shooting flames, riding a giant shark.